She holds a BA in Political Science from Vassar College and a Master of Public Policy from UC Berkeley. Freewater is her debut novel. The novel has received critical acclaim with five starred reviews—including one from Kirkus, Horn Book, Publisher’s Weekly, Booklist and School and Library Connection. Freewater was recognized by Entertainment Weekly Magazine as a Black History Month pick and was featured on NPR’s nationally syndicated program Here and Now. She’s a proud mother of a 14-year-old son. She, her husband and son reside in Arlington, VA.

Debut author Amina Luqman-Dawson pens a lyrical, accessible historical middle-grade novel about two enslaved children’s escape from a plantation and the many ways they find freedom.

Under the cover of night, twelve-year-old Homer flees Southerland Plantation with his little sister Ada, unwillingly leaving their beloved mother behind. Much as he adores her and fears for her life, Homer knows there’s no turning back, not with the overseer on their trail. Through tangled vines, secret doorways, and over a sky bridge, the two find a secret community called Freewater, deep in the swamp.

In this society created by formerly enslaved people and some freeborn children, Homer finds new friends, almost forgetting where he came from. But when he learns of a threat that could destroy Freewater, he crafts a plan to find his mother and help his new home.

Deeply inspiring and loosely based on the history of maroon communities in the South, this is a striking tale of survival, adventure, friendship, and courage. 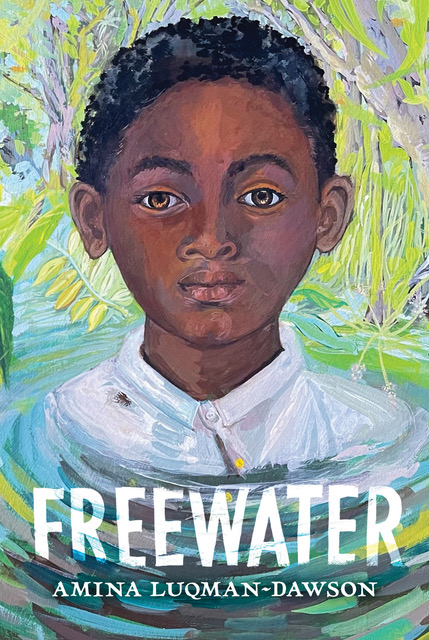