April Harrison is a relative newcomer to the children’s picture book world. Her first book What is Given From the Heart written by the late Patricia McKissack, released in 2019 went on to win the Coretta Scott King- John Steptoe Award for 2020 new illustrator. Her second illustrated book Nana Akua Goes to School written by Tricia Elam Walker won the Children’s Africana Book Award for 2021. Her third book Shirley Chisolm Dared written by Alicia D Williams won the Jane Addams (books for younger children) Children’s Book Award for 2022 . April’s latest illustrated book are H is for Harlem, written by Dinah Johnson and Me and The Boss written by Michelle Edwards. For more information about April Harrison visit her website www.april-harrison.com.

ME AND THE BOSS

All the highs and lows of having a bossy, protective, and loving older sibling are depicted in this heartwarming picture book by a critically acclaimed author and award-winning illustrator. Meet Lee, a little boy who won’t give up until he learns how to sew, and Zora, the sister who watches him try–and ultimately succeed!

“I know big sisters. Zora, the boss, she’s mine,” explains Lee as he and Zora head to the library, where Mrs. C is teaching the children how to sew. Though Zora sews a beautiful flower on her cloth square, little Lee makes a mess out of the half-moon he is trying to stitch. That night, when he can’t sleep, he gives sewing another try…and succeeds, even mending the hole in his pants pocket! The next morning, he sneaks into Zora’s room and sews the ear back on Bess, her stuffed bear. When Zora discovers Bess, she wraps Lee in her special big sister hug–for just a moment–and then is back to being the boss once again. An acclaimed author and a Coretta Scott King-John Steptoe Award-winning illustrator create a funny, oh-so-true portrait of a brother and sister’s relationship in this winning picture book. 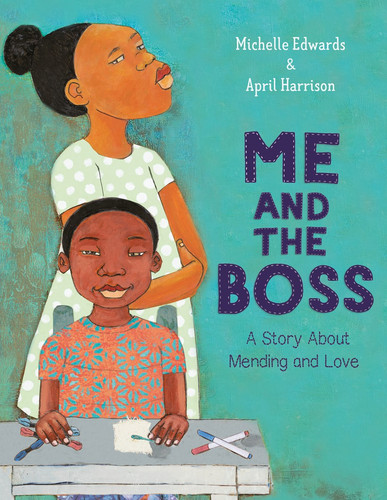 ME AND THE BOSS