FRANK MORRISON started his journey as a graffiti artist in New Jersey, tagging walls with spray paint. It wasn’t until he visited the Louvre Museum in Paris as part of the Sugar Hill Gang’s dance entourage that he realized painting was his true creative path. His work has been featured at Art Basel, SCOPE Miami Beach, Red Dot Art Fairs, The Schomburg Center for Research in Black Culture and the Mason Fine Art Gallery in Atlanta. He is the illustrator of over twenty children’s books, including the Coretta Scott King Illustrator Award winner R-E-S-P-E-C-T, the Coretta Scott King-John Steptoe Award winner for Jazzy Miz Mozetta, and the Coretta Scott King Illustrator Honor books Little Melba and Her Big Trombone and Let the Children March. Frank was a Society of Illustrators Original Art Silver Medal Honoree two years in a row, for The Roots of Rap.

Award-winning picture book creator Frank Morrison makes his author/illustrator debut in an exuberant story about being yourself.

Epic has tricks you won’t believe. He’s the kick flipping, big rail king. When his family moves to a new neighborhood, he can’t wait to hit the street with his skateboard. But his old moves don’t feel fresh without a crew to see ’em. Epic thinks about giving up his board to fit in, but an encouraging word from his dad helps him see that the trick to making new friends is to always be yourself. Be you. . . be epic!

Award-winning illustrator Frank Morrison offers a heartwarming, dynamic celebration of self-expression, inspired by his own journey through fatherhood. 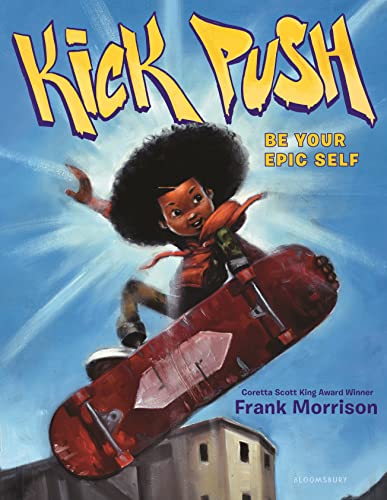