While attending a Valentine’s Dance in high school, GLORIA JEAN PINKNEY met illustrator Jerry Pinkney, her deceased husband of sixty-one years, and best friend for sixty-four. Jerry attributed much of his award-winning books to Gloria’s long-standing involvement in his work.
Together the Pinkneys established Jerry’s writing voice in his memoir, Just JerrY: How Drawing Shaped My Life. To date, Just Jerry has received five-star reviews.

Gloria is the author of two fact-based fictional books for children and three books of religious truths. She feels her best work to be In the Forest of Your Remembrance – published by Penguin-Random House.

An inspiring memoir of a Caldecott-winning artist and one of the most acclaimed children’s book illustrators of all time, sharing the story of a young artist who finds the courage to follow his passion against all odds.

* “A moving work from a legend of children’s literature and a testament to his legacy of visual storytelling.” —Kirkus Reviews, starred review

Jerry Pinkney—creator of Caldecott Medal-winning The Lion & the Mouse and The Little Mermaid—drew everywhere, all the time. Since childhood, it was how he made sense of the world—how he coped with the stress of being a sensitive child growing up in crowded spaces, struggling with a learning disability, in a time when the segregation of Black Americans was the norm. Only drawing could offer him a sense of calm, control, and confidence. When friends and siblings teased him about having the nickname “Jerry” as his only name, his mother always said, “Just ‘Jerry’ is enough. He’ll make something of that name someday.” And so he did, eventually becoming one of the most celebrated children’s book illustrators of all time and paving the way for countless other Black artists.

Jerry’s vivid recollections and lively sketchbook drawings of his youth in postwar America tell an inspiring story of how a hardworking boy pursued his passion in less-than-ideal circumstances and became a legendary artist against all odds. 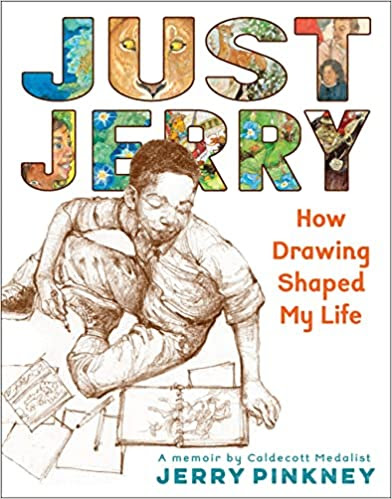