GORDON C. JAMES’ chosen artistic genre has its roots in Impressionism. The art of John Singer Sargent, Nicholai Fechin, Henry Ossawa Tanner, and many others inspired James to pursue a style that is both academic and expressive. As a result his work contains a lyricism not often found in contemporary art. Be it through the sensitivity found in his romantic pieces, or commitment to excellence in his commercial work, James always connects with his viewer. He says of his work, “When people see my art I want them to say, I know that person, I know that feeling.” James currently resides in Charlotte, NC with his wife Ingrid, their children Astrid and Gabriel, and their dog Rascal.

As a boy, Andrew Young learned a vital lesson from his parents when a local chapter of the Nazi party instigated racial unrest in their hometown of New Orleans in the 1930s. While Hitler’s teachings promoted White supremacy, Andrew’s father, told him that when dealing with the sickness of racism, “Don’t get mad, get smart.” To drive home this idea, Andrew Young Senior took his family to the local movie house to see a newsreel of track star Jesse Owens racing toward Olympic gold, showing the world that the best way to promote equality is to focus on the finish line. The teaching of his parents, and Jesse Owens’ example, would be the guiding principles that shaped Andrew’s beliefs in nonviolence and built his foundation as a civil rights leader and advisor to Dr. Martin Luther King, Jr. The story is vividly recalled by Paula Young Shelton, Andrew’s daughter. 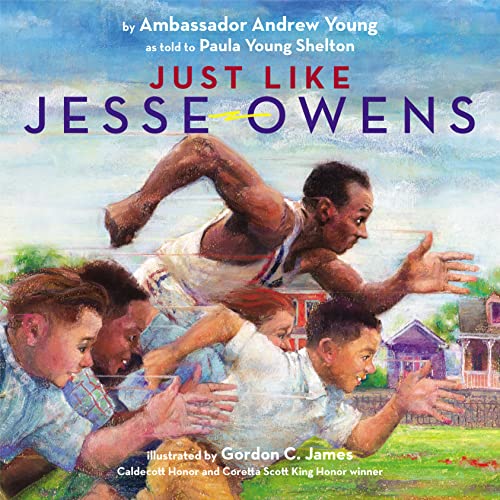