JAMES E. RANSOME is an award-winning illustrator and emeritus Professor of Illustration at Syracuse University and Pratt Institute, who has illustrated over seventy books for children. He has received both the Coretta Scott King Award for Illustration and the International Board on Books for Young People(IBBY) Honor Award for The Creation, and a Coretta Scott King Award, along with three Coretta ScottHonor Awards,for Uncle Jed’s Barbershop (an ALA Notable book featured on Reading Rainbow),Before She Was Harriet and The Bell Rang, which he also wrote.
How Many Stars in the Sky? and Sweet Clara and the Freedom Quilt were also Reading Rainbow selections, and The Old Dog appeared on PBS’s Storytime. Ransome was the recipient of The Simon Wiesenthal Museum of Tolerance award for The Wagon; Let My People Go was awarded the NAACP Image Award for Illustration; and Satchel Paige was designated a best children’s book by Bank Street College of Education; among many other honors. While the book Skyboys received the Boston Globe-Horn Book Honor.

He has illustrated works for a wide variety of clients, including the History Channel’s Black Patriots (Heroes of The Civil War), he is a regular illustration contributor to Alta Magazine, Theater posters for Arena Stage and Texas Monthly. He has created murals for Poughkeepsie’s Adriance Memorial Library, the Children’s Museum of Indianapolis and the Underground Railroad Museum in Cincinnati.

In addition to his work in children’s books, James has had over number, one-person exhibitions in such venues as the Orlando Museum of Art, Appleton Museum of Art, Joslyn Art Museum, Upcountry History Museum – Furman University and the NIU Art Museum. He has exhibited in a number ofgroup shows and his art can be found in the permanent collections at the Library of Congress. James lives in Rhinebeck with his wife and frequent collaborator, author Lesa Cline-Ransome.

THE STORY OF THE SAXOPHONE

The amazing duo – husband and wife, James Ransome and Lesa Cline-Ransome in their latest colloboration tell the story of the saxophone, Many think it begins with Dexter Gordon or Charlie Parker, or in New Orleans or the smoky jazz clubs of Harlem, but It really began in 1840 in Belgium with a young daydreamer named Joseph-Antoine Adolphe Sax—a boy with bad luck but great ideas.

Coretta Scott King Honoree Lesa Cline-Ransome unravels the fascinating history of how Adolphe’s reviled instrument was transported across Europe and Mexico to New Orleans. Follow the saxophone’s journey from Adolphe’s imagination to the pawn shop window where it caught the eye of musician Sidney Bechet and became the iconic symbol of jazz music it is today.

The book beautifully illustrated by James E. Ransome, includes a poster of iconic jazz musicians inside the book jacket. 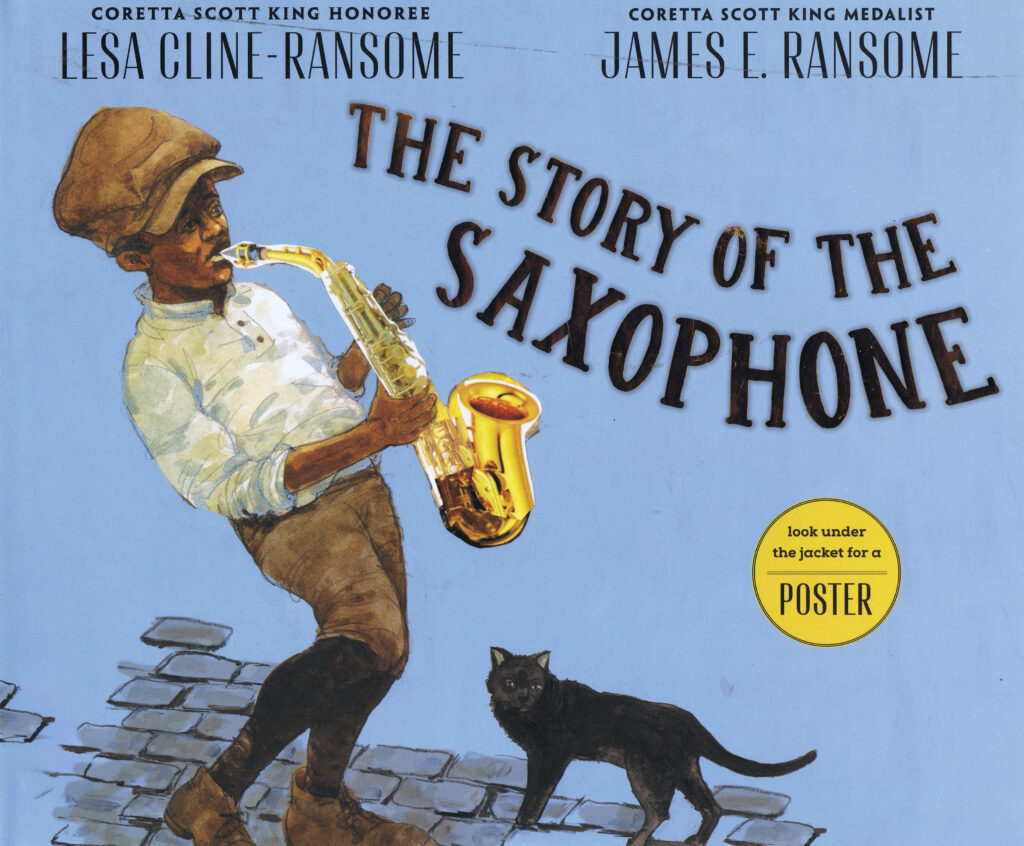 THE STORY OF THE SAXOPHONE