NANA EKUA BREW-HAMMOND is the the author of the children’s picture book BLUE: A History of the Color as Deep as the Sea and as Wide as the Sky, illustrated by Caldecott Honor Artist Daniel Minter, the young adult novel Powder Necklace, which Publishers Weekly called “a winning debut”, and she is the editor of RELATIONS: An Anthology of African and Diaspora Voices.
Her short fiction for adult readers is included in the anthologies Accra Noir, Africa39: New Writing from Africa South of the Sahara, New Daughters of Africa, Everyday People: The Color of Life, and Woman’s Work. Forthcoming from Brew-Hammond are a novel and a children’s picture book. Brew-Hammond was a 2019 Edward F. Albee Foundation fellow, a 2018 Aké Arts and Book Festival guest author, a 2017 Aspen Ideas Festival Scholar, a 2016 Hedgebrook writer in residence, and a 2015 Rhode Island Writers Colony writer in residence. Every month, Brew-Hammond co-leads a writing fellowship whose mission is to write light into darkness. Follow her: @nanaekuawriter (FB and IG), @nanaekua on Twitter.

BLUE: A HISTORY OF THE COLOR AS DEEP AS THE SEA AND AS WIDE AS THE SKY

Discover a world of creativity and tradition in this fascinating picture book that explores the history and cultural significance of the color blue. From a critically acclaimed author and an award-winning illustrator comes a vivid, gorgeous book for readers of all ages.

NAMED ONE OF THE BEST BOOKS OF THE YEAR BY NPR

For centuries, blue powders and dyes were some of the most sought-after materials in the world. Ancient Afghan painters ground mass quantities of sapphire rocks to use for their paints, while snails were harvested in Eurasia for the tiny amounts of blue that their bodies would release.

And then there was indigo, which was so valuable that American plantations grew it as a cash crop on the backs of African slaves. It wasn’t until 1905, when Adolf von Baeyer created a chemical blue dye, that blue could be used for anything and everything–most notably that uniform of workers everywhere, blue jeans.

With stunning illustrations by Caldecott Honor Artist Daniel Minter, this vibrant and fascinating picture book follows one color’s journey through time and across the world, as it becomes the blue we know today. 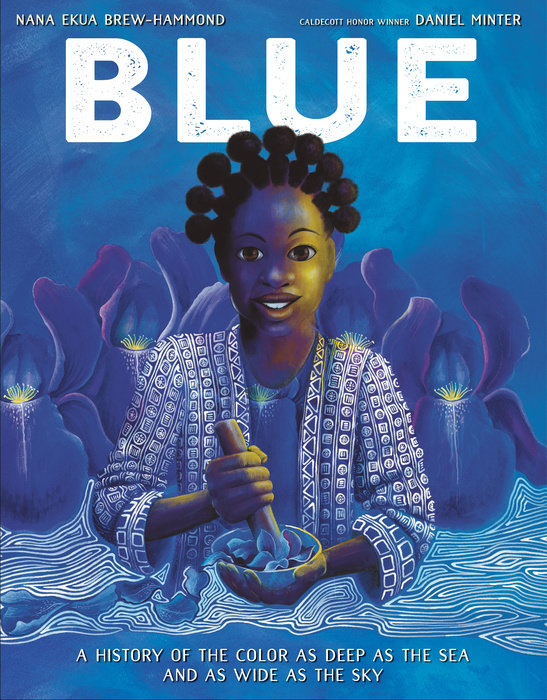 BLUE: A HISTORY OF THE COLOR AS DEEP AS THE SEA AND AS WIDE AS THE SKY